“This imposing ruin, overlooking the River Wharfe and the valley below

has a history as long and romantic as its appearance suggests.”

The bunkbarn is located in the shadow of Barden Tower. This imposing ruin, overlooking the River Wharfe and the valley below has a history as long and romantic as its appearance suggests. Barden, lying between Bolton Abbey to the South and Burnsall to the North was part of the Craven Estates granted to the Norman baron Robert de Romille after the Conquest.

The name Barden means “the valley of the wild boar” in Anglo-Saxon and hunting has been popular in the forest since earliest times. The Tower was originally one of several hunting lodges in the forest. Its importance soon grew as it became an administrative centre holding forest courts. The Tower became a miniature castle capable of defending itself against marauders including the Scots and an outpost for chasing poachers.

In 1310 Barden and all the surrounding lands came into possession of the Clifford family. They were staunch Lancastrians and became the sworn enemy of the Yorkist kings. Henry, the 10th Lord Clifford “the Shepherd Lord” was born during the War of the Roses and had to live in exile hidden in the Cumbrian Fells. When Henry VII became king in 1485 the Lancastrian families regained their lands and The Shepherd Lord decided to live at Barden Tower in preference to other much grander castles. He enlarged the Tower and built the chapel at the adjacent Priests House and, with the Canons of Bolton Priory, had a keen interest in astronomy which led to the upstairs dining room being named the “Stargazers Room”. He became more recluse from the outside world although holding regular feasts for the locals in the Great Hall.

During the Scottish war of 1513, then in his sixtieth year, he commanded the men of Craven at the battle of Flodden Field, when Upper VVharfedale and Langstrothdale re-echoed with the pomp and tramp of feudal warfare for the last time. The Craven men marched north to

" The stern strife and carnage drear Of Floddeu's fatal field,

Where shivered was fair -Scotland's spear,

And broken was her shield."

We are told the men of Craven bore themselves well and did good service for their country in this furious battle, where

Obstinate was the fight, the slaughter dreadful; the Scottish king was slain, and the contest not ended at nightfall. Dispirited by the loss of their king, in gloomy despair the remnant of the Scottish army retreated under cover of darkness.

It is thought the pikes and halberds still hanging from the beams in the main restaurant dining area were used in this battle. The Shepherd Lord died in 1523 and the Tower largely reverted back to a hunting lodge for several generations. This was not the end though. Lady Anne Clifford contested the will of her father that the estates should be bequeathed to the male heirs and finally came into possession of them in 1643. Initially the Civil Wars prevented much progress being made but by 1657 restoration work on the Tower was underway.  As a seal of her work a plaque on the South Wall says ....

“ by the Ladie Anne Clifford countess Dowager of Pembrokee Dorsett and Montgomery Baroness Clifford Westmerland and veseie lady of the honor of Skipton in Craven and high sherifesse by inheritance of the Countie of Westmerland in the yeares 1658 and 1659 after it had been layne ruinous ever since about 1589 when her mother lay in itt and was greate with child with her till nowe that itt was repayred by sayd lady. ISA. Chapt. 58. Ver. 12. Gods name be praised! ”

There are several barns surrounding the Tower, one of which is now the Barden Bunk Barn. The pictures below show how the inside of the barn looked prior to it being renovated in 1984. 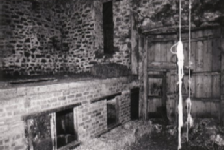 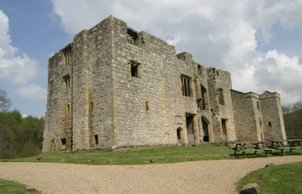 OPEN All Year Round